As I mentioned earlier, my mom was an avid genealogist. In the course of her research she collected lots and LOTS of material. That's the "up" side. But (and this is a definite "down" side) she was working at a time when no one had computers to help organize and publish things. So I inherited all of my mom's files. Boxes and boxes of files. And loose papers. And hand-written notes from people. And photos. And old photostats. Etc.......

I gave most of the Etchison materials to the Indiana State Library. Those things are available for anyone to see there. But what should I do with everything else? And then there are my own materials that I've collected.

Is it appropriate to post things here on this blog (such as old will transcripts)? Should I start a web site where those things could be "stored", then refer to blog readers there? I'm sure there are lots of options that I haven't even thought of.

Let me know what's worked for you or what you've seen on other blogs. And thanks for your help.
Posted by Charr Skirvin at 12:28 PM No comments:

I have always loved this story from my mother's files:

"During my childhood (1920s), my mother, Mary Ann Price, and her sister, Banche Sedam, visited each other and the talk would eventually turn to their childhood and the memories they had of their grandmother, Mary Ann Pierce. My mother was her namesake.

"Mary Ann Pierce was divorced when her children were young and she supported them by working outside her home. One of her jobs was head cook at the Bates House in Indianapolis and another was the store she and her husband had in a fort in Wyoming.

"Legend had it that she had married several times, but neither my mother nor Aunt Blanche could remember. Each time their grandmother visited their home it seemed that she was accompanied by a different husband! The names Crout, Rhodes and Pilson were often recalled. Frankly, there was doubt that she had been married to anyone except their grandfather, James Pierce.

"Mary Ann Pierce returned to her family regularly to buy supplies for her store and to replenish her wardrobe. She would arrive dressed in buckskins and wearing her six-shooters which was an embarrassment to those who met her train. When she left them, she would be dressed in the latest fashion - always black. And while in the household, she was domineering and the children "danced to her tune."

"Family photographs show her as a large woman, dressed in her black finery. No photograph of any husband exists in the family.

"Through marriage records and census records, it has been proven that Mary Ann did indeed have more than one husband and that she lived in Wyoming. Her first marriage was to James Pierce. There is a marriage record in Laramie, Wyoming that shows her name as Crout, and she married William H. Lovett on 25 March 1876. The 1900 census shows that she lived in the home of her son, Harvey, in Indianapolis and her name is Pilson."
Posted by Charr Skirvin at 3:45 PM 1 comment:

I've been thinking lately about all these photographs that we genealogists treasure. It's wonderful to see what Great-Great-Grandad looked liked like. It's amazing to see how much we look like Great-Great-Grandad. When I look at my collection of photographs, I get a sense of the reality of the people who came before me.

We're so lucky to have these photos. I think we're among the first of the generations to be able to look back at pictures of people who were dead long before we were born. Before now, you could only do this if you came from a family that was rich enough or had enough foresight to have portraits painted.
Posted by Charr Skirvin at 12:43 PM 5 comments: 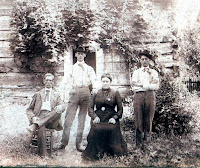 I love this photo for so many reasons. But first, who are these people? From left to right, they are Daniel M. Etchison (1846-1917) and Sarah Pierce Etchison (1861 - ?) with two of their children, Harvey and Shade, in front of their Indiana Cabin. I don't know when or exactly where this photo was taken.


Daniel was a Civil War veteran, fighting for North Carolina and the Confederacy in the final year of the war. While I favor the Etchisons, my sister must favor the Pierces since she and Sarah could be twins. I love the clarity of the photographs taken with the old large-format cameras. I also love the fact that Shade seems to have been unwilling to join the rest of the family - typical teenager! - while Harvey poses as the "good son" between his parents.


The following note was written by my mother: "My mother [this would have been Mary Ann Etichison Price] told me her father was a soldier in the Civil War. He lived in North Carolina during that time and several of his brothers and cousins served in the war with him. My mother's sister disagreed with the story. She claimed he was not old enough to serve. When the South started to call all men, both young and old, his family hid him in a cave in the mountains near their home. My grandfather was born 30 September 1846 in Davies county, North Carolina. He would have been 14 years old when the civil war began. I do not know which person told the correct story. A search in the records needs to be done to prove which story is correct."


Thanks to resources available to us researchers now, the question has been answered. Daniel Etchison enlisted in Company B, 6th Infantry, North Carolina, at Camp Vance on 16 Oct. 1864. He served until the end of the war. Official records say that his unit mustered out on 9 Apr. 1865. If you look at a list of the 6th Infantry's battles you'll see that they continued to fight into June, 1865.

Posted by Charr Skirvin at 8:36 PM No comments:

Maxine Brown (my mother) and June B. Barekman compiled three volumes of Etchison family genealogy. They are:

I am happy to do single look-ups in these volumes. I also have a limited number of copies to sell. If you're interested, please send a comment on this post. All comments are private until I "publish" them, so your information is not public unless you give me permission to post it.
Posted by Charr Skirvin at 11:20 AM 3 comments:

Email ThisBlogThis!Share to TwitterShare to FacebookShare to Pinterest
Labels: Etchison

Welcome to my genealogy blog.

I've been exploring my family history for more years than I can remember.  I literally started at my mother's knee.  My mom, Maxine (Price, Greiner) Brown, was an avid, meticulous genealogist.  All of us in the family (and there were 6 of us kids) were recruited at one time or another to take notes, endure cemetery visits, and fend for ourselves while Mom attended meetings or visited court houses.  I swore I would never succumb.  And here I am .......

The majority of my ancestors immigrated to America from western Europe and the British Isles.  They settled on the eastern seaboard, then eventually migrated to Indiana.  I'll be sharing my findings as I continue to research my ancestors.  I'm convinced, as was Fox Mulder in The X-Files, that the truth is indeed out there somewhere.  I just need to keep looking. 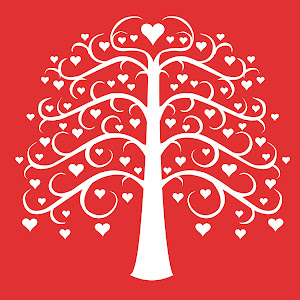